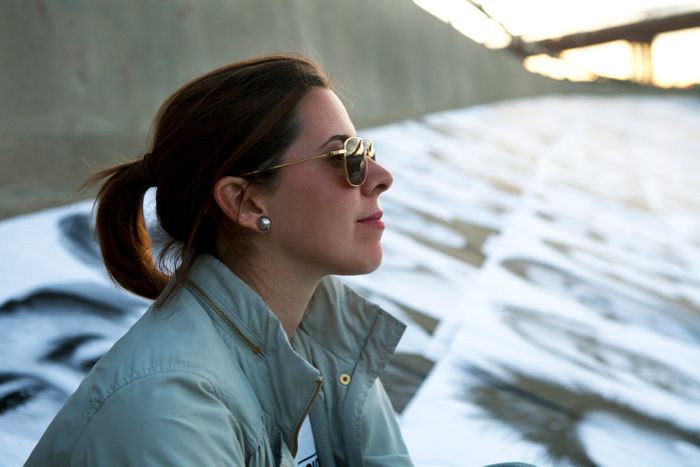 On the border of Mexico and United States in Ciudad Juarez and El Paso TX, pasting portraits for the Inside Out Project in the Rio Grande walls.

Monica Lozano is a Mexican-American photographer born in El Paso, Texas and raised across the border in the sister city of Ciudad Juarez, Mexico. Lozano received her Master’s Degree in Photography in Madrid, Spain in Escuela Universitaria TAI. Her work has won various international photo competitions and grants, including two medals in Le Grand Prix de la Photographie Paris 2019. She was published in Portrait of Humanity Book by British Journal of Photography and Magnum Photos as well as Witness for World Press Photo and Fotofeminas. In 2011 Lozano finished the Photo Global residency at the School of Visual Arts in New York City on a presidential scholarship which she won at the International Talent Support #ITSEIGHT Contest in Trieste, Italy.

Her work has been featured under the “One To Watch” section of American Photo Magazine and the Columbia Journalism Review selected her for the “20 Women to Watch” list in 2011. Lozano collaborated with the TED Award winner JR on his Inside Out Project in Mexico creating and coordinating a massive worldwide public art action called "Be The Change", in which 21 countries exchanged portraits and pasted them on public spaces during the International Day of Peace in 2012. Lozano and her work were featured in the film, Inside Out, which premiered at the 2013 Tribeca Film Festival. Her work was selected for the opening exhibition of Latin America's first photographic and image museum founded by the Pedro Meyer Foundation in Mexico City. Lozano's elegant and socially charged portraits have been exhibited in 13 Countries. Lozano is currently documenting the dire conditions of immigrants, displaced, refugees and asylum-seekers housed in shelters and detention facilities in Juarez and El Paso and at the same time she is working with the University of Colorado at Boulder and Aspen and the Crown Institute as an ethnographic researcher and photographer with immigrant families in the United States.