Living in the border has made me a witness to the devastation of individuals that occurs today right in front of my eyes. Unfortunately, this phenomenon replicates along many borders. Immigrants are forced to escape the horror they live in their countries, having no other choice than to take this traumatic journey. People are stripped from their land, home, economy, identity, language, and most of them are left with no personal belongings to survive the basic human needs. Confronted with a population who feels threatened by them, immigrants stand alone and deprived from their human rights.

The contemporary still lives captured in this series speak of an ephemeral world that forces us to rediscover the journey of the migrant, a hero of our time trapped between two increasingly cruel worlds. The intention is to approach the intimacy of stories of migrants and we start this series with families from El Salvador, Guatemala and Nicaragua. Men, women and children who have experienced in their own flesh the hostility of a trip that apparently has no final destination. Their few possessions, which are often the only thing that connects them to the warmth of their origin, function as survival kits that keep them alive in threatening moments.These photographs were taken in July and August 2019 and 2020 on the border of Ciudad Juarez and El paso TX. It is necessary to put a spotlight on the dignity and resistance of these travelers, it is urgent that our society learns how to see, it is necessary to deactivate the discourses of hatred and racism. Very few dare to understand a new way of appreciating this type of resistance, resistance to survive. 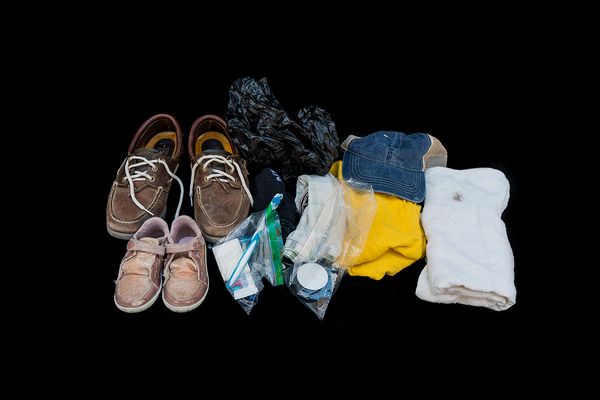 Ever 33, wife, 7 year old son and 3 year old daughter Sofia, traveled to the border of Mexico and the United States. Due to the economic crisis in Honduras, they decided to take this difficult journey after selling their coffee farm and purchasing a "travel package" to the United States. While trying to cross the Rio Grande in Ciudad Juárez Mexico, his family was separated, Ever followed instructions and ran across the dry Rio Grande carrying Sofia and did not look back to see that his wife and son were caught by the Mexican Federal police. After being detained for 10 days in the US, they are now in an asylum house in Juarez Mexico trying to find their family and some money to survive. Far from the possibility of entering the United States, he is obliged to return to his country and cover his debt without sufficient financial means or a secure job. 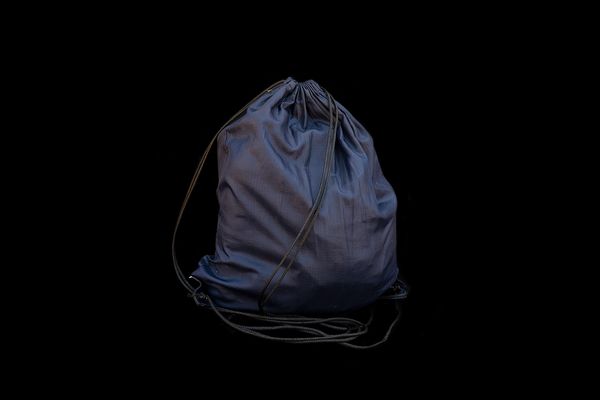 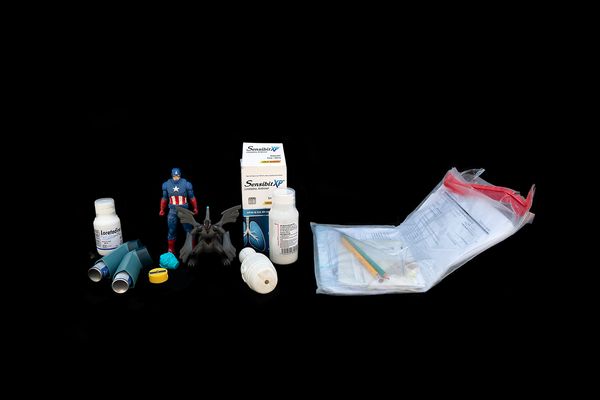 Ember and his 6-year-old son Santiago fled Honduras under death threats. They are part of the displaced individuals by social violence. His parents, brothers and sisters raised enough money so he could flee the country along with his son. Ember was a refugee throughout Central America, before the harassment of local gangs and the very few possibilities of integrating into the economy of his country. He carried Santiago's medicines in his chest and traveled across Mexico. Ember was arrested by the Mexican immigration police and although he fears for his son's health and life, he is waiting to return to his country. 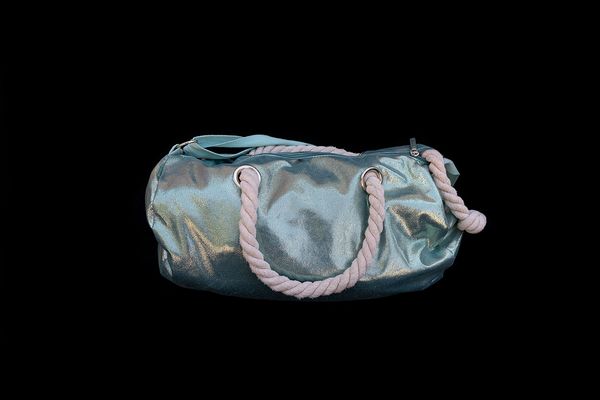 Bertha and her 3 children 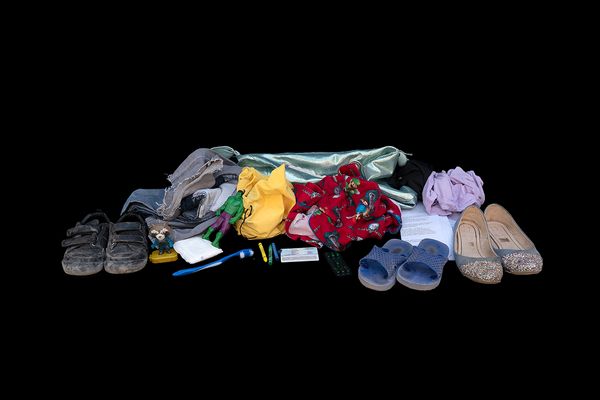 Bertha and her 3 children ran away from her native Guatemala where she lived terrified by the increase in child abduction. Motivated by rumors that families with young children will receive automatic asylum upon entering the United States they embarked on a hard journey through Mexico. Upon arriving at the border, her mother, who is already somewhere in the neighboring country, informed her that she could not accept her and her children at her home. Bertha and her young children have been in a migrant's house for three weeks, caught between two hostile realities. 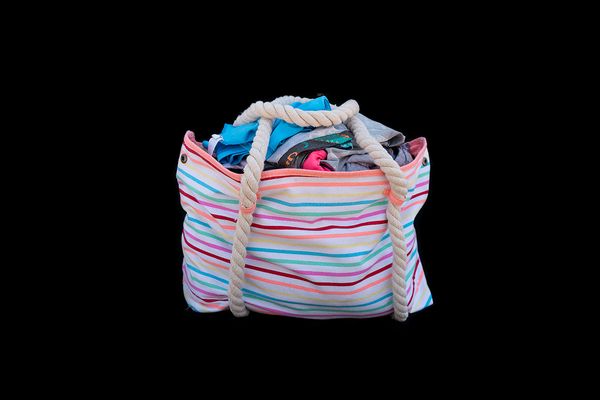 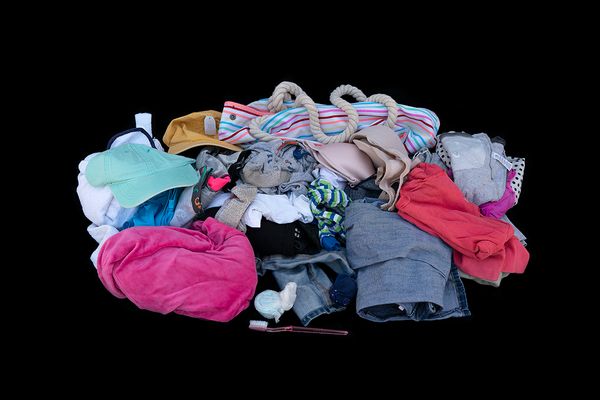 Elma is 33 and her son Erson traveled in a compact car with more than twelve people on board. They were fleeing violence in their country. On the way they suffered a car accident in which the windshield fell on her and her son, they had to stop to heal the wounds. In the place where they were recovering they suffered an express kidnapping and were deprived of money and possessions. During their kid- napping they were threatened with heavy caliber weapons. 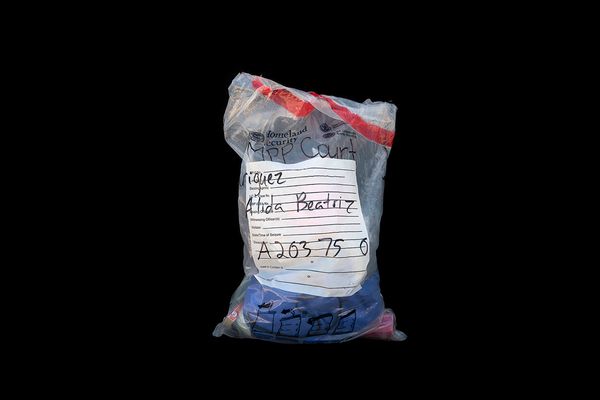 This bag contains the belongings of Alida and her daughter from Guatemala. They were returned to them after being deported from the United States Homeland Security. 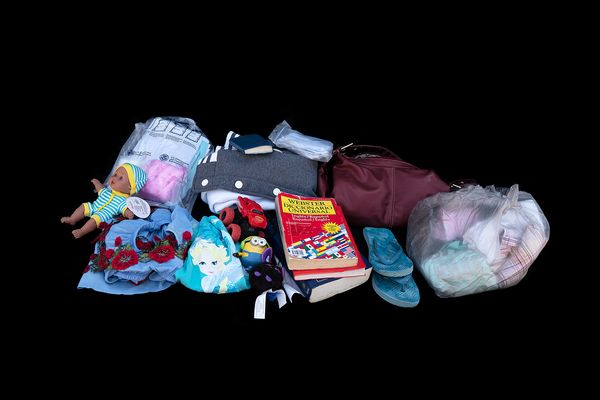 Alida, 33 and her 9 year old daughter traveled from Guatemala to the United States. They crossed the border and were detained by the US Border Patrol who took them to the “cooler”. Alida asked, “Why are they disgusted by us?” with her eyes full of painful tears. Alida told her story as a helpless journey in which at every step she suffered in her own flesh the abandonment of her own country and the misunderstanding of a culture that was alien to her. 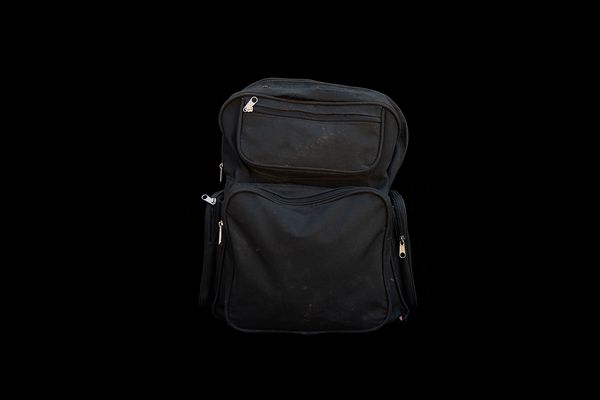 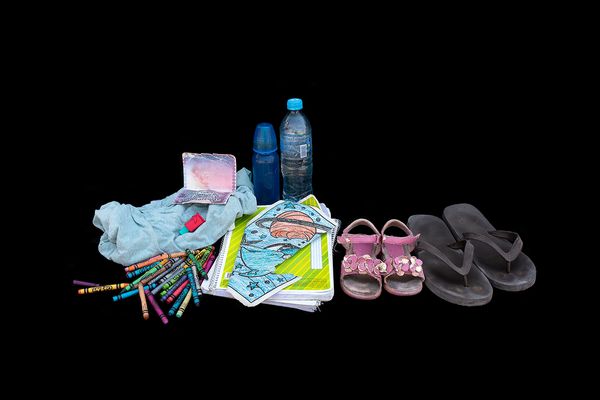 Given the lack of work and uncontrolled violence in rural Honduras, Elida, 30 and Ashley 3 years old, decided to go out with her family and try to reach the United States. Originally she went out with her husband, who abandoned them to cross the border. Since then they travel alone and without help. They do not know when they will have their appointment with migration. 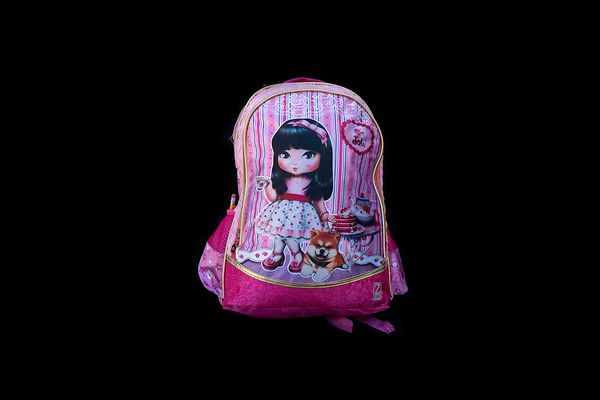 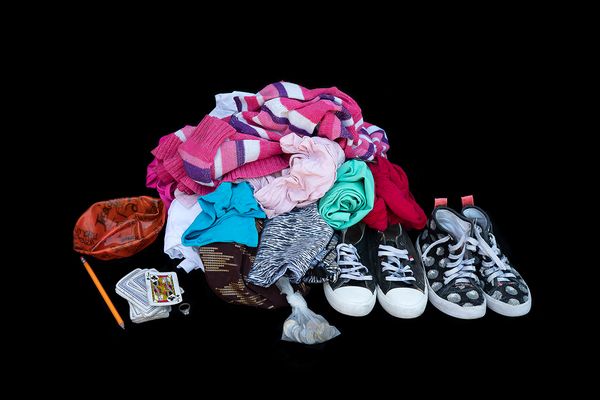 Janeth and Alejandra were victims of political violence in Guatemala. By refusing to support certain political party, her husband was disappeared and they received death threats. They decided to leave their place of origin, despite of this, the threats got to where they were hiding. They decided to migrate to the United States, however they were rejected on their first day and they must return to Guatemala shortly after living more than five months in Ciudad Juarez, Mexico. 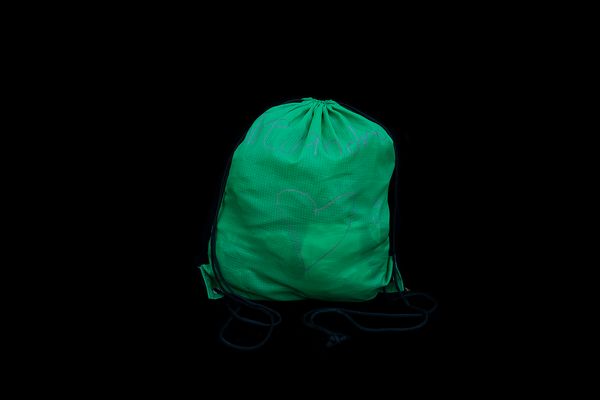 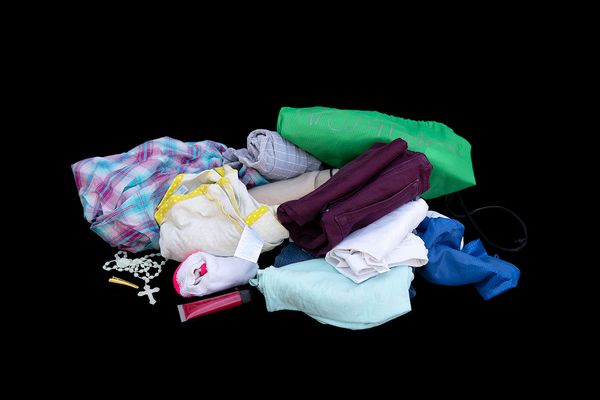 Alejandra and Angela are from the rural area of ​​El Salvador, they had to leave their country because a storm swept through their town and left the area devastated. They crossed the country on foot, joined a caravan that took them to Mexico City. There they worked in a small clothes stand until they managed to raise the money to reach the border. Once in Juárez they have taken refuge in La casa del Migrante for several days. Alejandra says she has lost faith. They carry a cross as the only memory of their home. 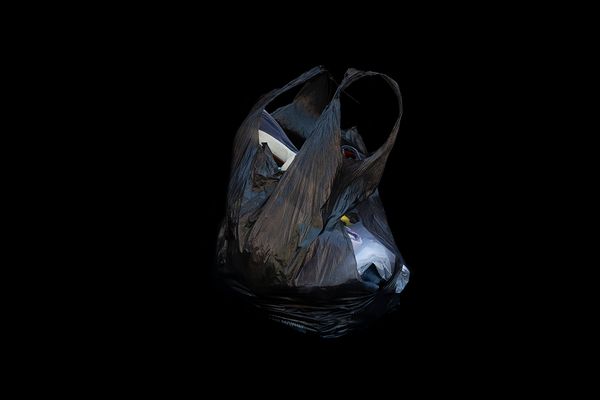 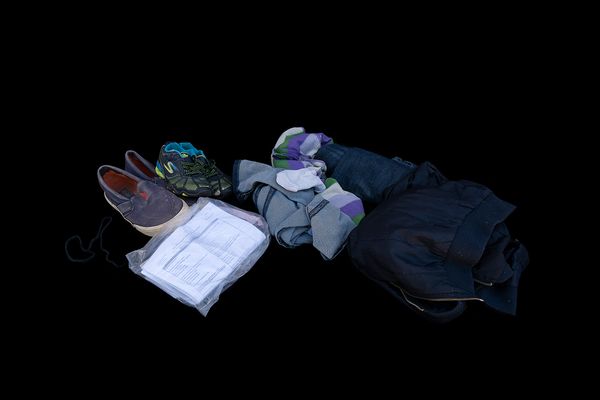 Sergio decided to travel due to the extreme poverty in his place of origin. Their story is that of thousands of people displaced by bad economic management of their governments. He told us that while there is employment, it is not possible to live with dignity due to the continuous increases in the products of basic needs and the taxes on production. He traveled with his five-year-old son in his arms, whom he had to carry for long stretches of the journey. He must return to Honduras and pay the debt he contracted with the human traffickers. He doesn't know what his future will be. 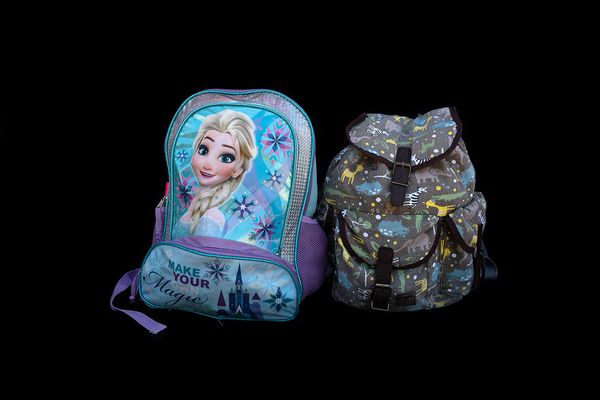 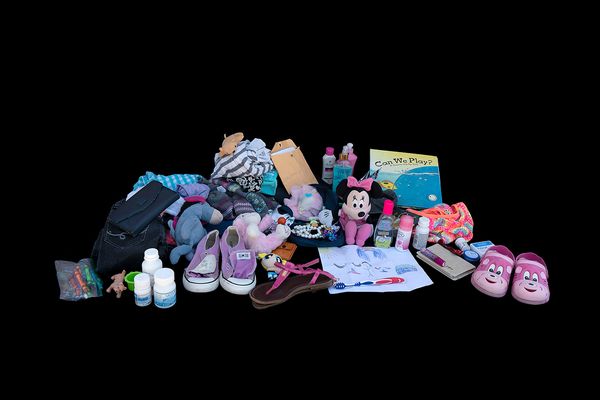 After two months in Ciudad Juárez, Carla 25 and Cristel 6 years old from Guatemala, feel helpless, they must wait three more months be- fore waiting for their next appointment with immigration. The trip for them seems eternal. They say that in the immigration offices there is no place for dignity, they "humiliate people". Both have suffered in their own body the effects of the trip, their clothes, their shoes and they were as battered as their mood. 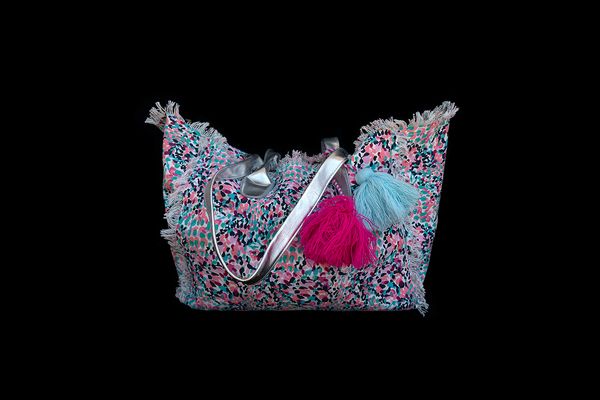 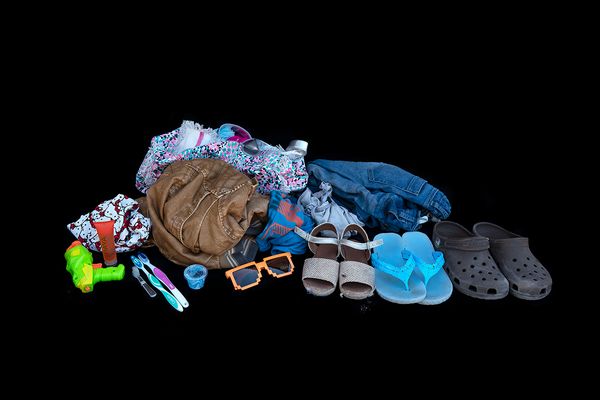 Mirna 29, Lizeth 4 and Lilian 13, left Honduras in a caravan that grew bigger every day. They suffered abuse after abuse by their travel companions. Mirna, the mother, spent long days without sleep taking care of her daughters to avoid further abuse. They have been at Casa del Migrante for three months now. They cannot return to their country since they have lost their home, they cannot stay in Mexico or enter the United States. It is unknown what will happen to them. 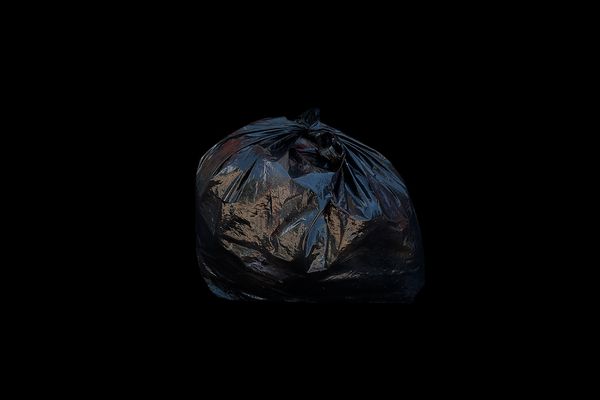 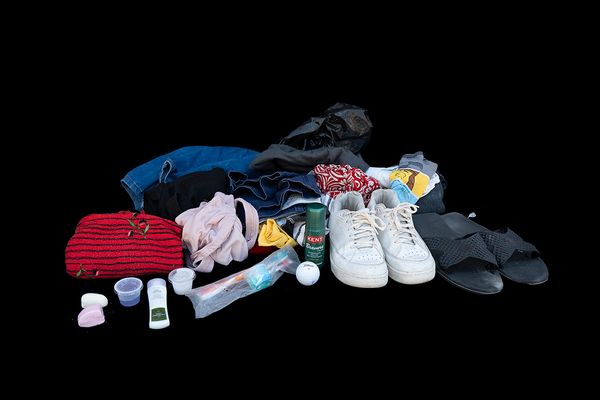 Elia and her family are from the rural area of ​​Nicaragua. Her family suffered a violent assault on their own home. She says that the insecurity is very high in her place of origin, despite this they decided to denounce the thieves. All but the boss of the gang were captured. Since then she has lived threatened with death. Recently, thieves were released and death threats became more constant and they decided to leave their land. They are in Cd. Juarez, waiting to resolve their immigration situation. 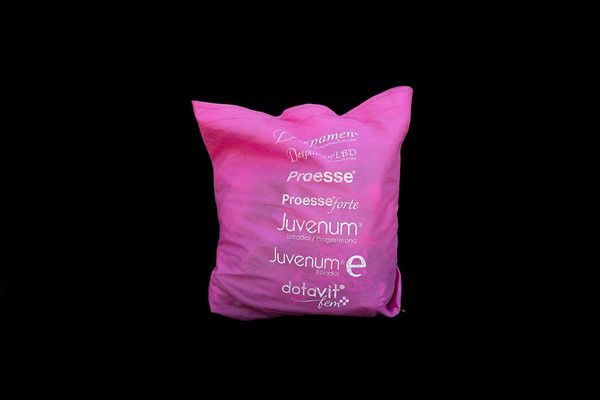 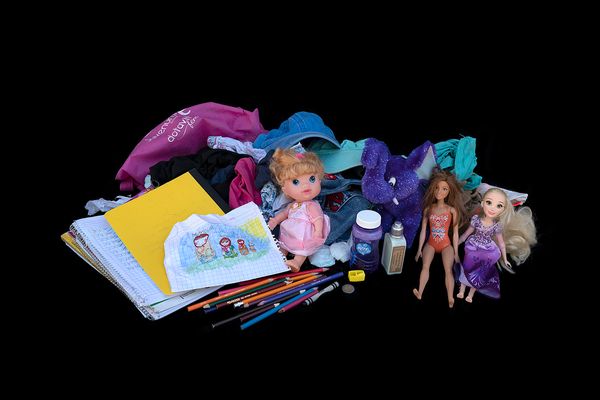 Sergia and her 9 year old daughter Yesli left Honduras displaced by political violence. She did not want to delve into the subject. She only explained that in her country voting for any party can have deadly consequences. While commenting on her case, we noticed that she was hiding her eyes behind sunglasses. Then she would confess that she had lost an eye and therefore wanted to hide her scar. 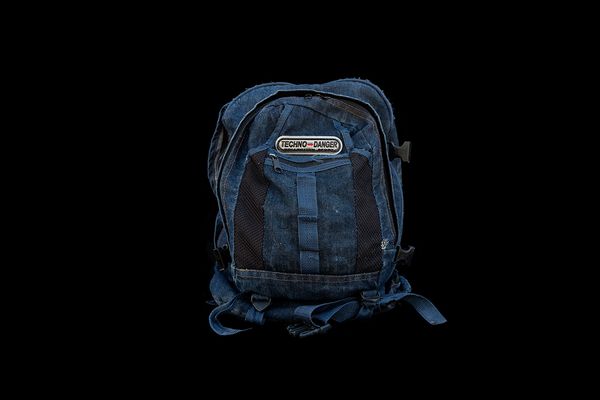 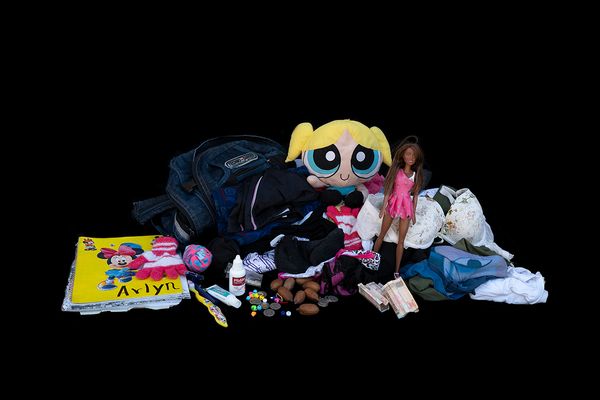 Isabel, 29 and her daughters, 9 and 6 years old, traveled hidden in the back of a bus for more than 24 hours. At one point along the way, they suffered an assault and lost almost all of their possessions. They have been in Ciudad Juárez for almost five months stating " we prefer the risk of the journey to the terror that lives in our country Guatemala." 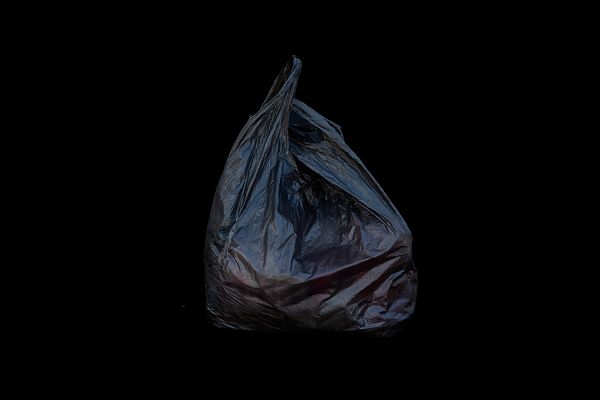 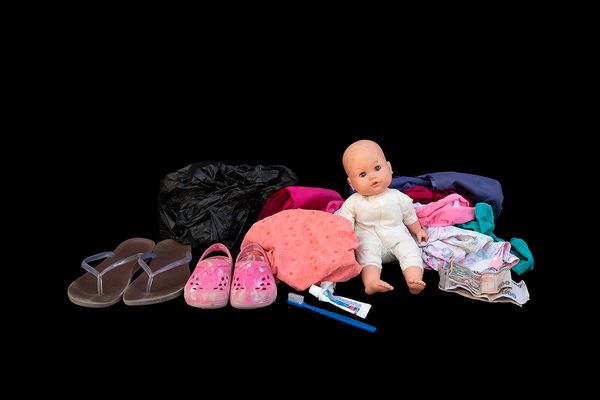 María Sarahi and Rebeca 3 years old, left Guatemala due to the rumor that circulated in their country that if the migrant was accompanied by children, asylum in the United States would be automatic. This rumor caused much expectation and much uncertainty in such a way that the kidnapping of children under 4 years went off. Families like Maria and Sarahi felt tremendously vulnerable and embarked on the difficult journey.